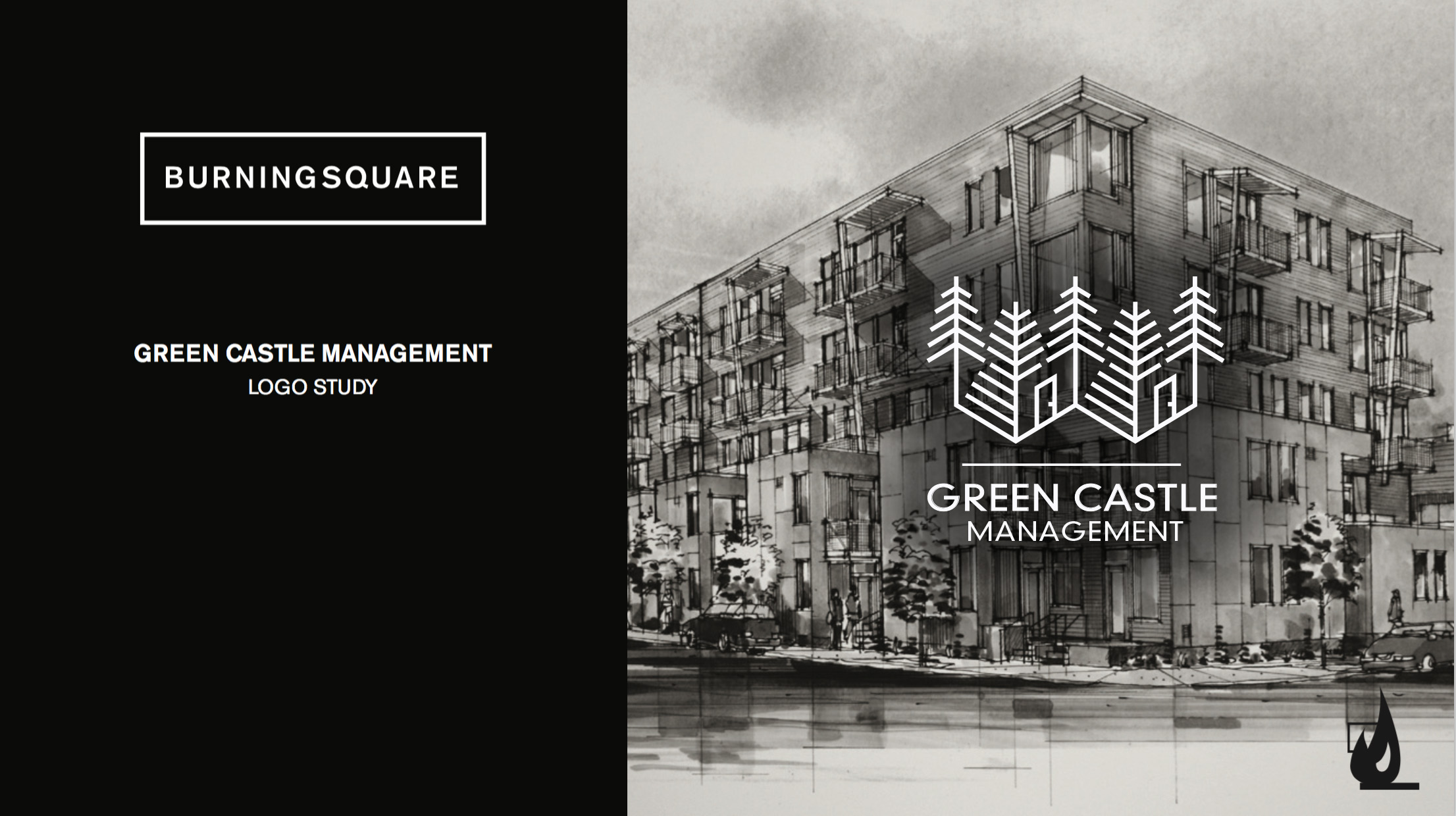 Posted at 19:02h in Business, Design by Jeremy 0 Comments

This post is a case study, as well as a peek into the process of designing a unique logo that is competitive in your market, and will help your company speak to your consumer. We will be looking at this process through a logo exploration I did for Green Castle Management, a Portland, OR property management company.

What makes an effective logo?

While your particular logo may have individual marketing goals attached to it, a logo in general needs to meet a few criteria to be effective as a logo. It needs to be:

No one wants a logo that is forgettable. Part of a logo’s job is to build brand recognition and get customers to remember you and seek you out.

Logo design, if done right, takes time. No one wants to have to redesign their logo every few years. Further, frequently changing your branding throws off your consumer and sabotages brand recognition. It is better to spend the time to design a logo that is going to last you the life of the brand rather than going through painful re-brands in the future.

While it is important to have your logo fit with your product or service, your brand should always differentiate you from the competition. Again, you want your customer to seek you out directly.

Your logo should fit you. Looking like the latest trend, style, or just something cool is worthless if it doesn’t speak to your company. Good logos speak to your consumer but also convey a message about your brand that is appropriate for that conversation.

How to make an effective logo: The case study

Green Castle Management, or GCM approached me in need of a logo. I met with Ashlee, my client contact, to find out a bit more about the company, the project, and to start developing a brief. Perhaps the most important part of the first meeting is to start to learn about the company’s brand story.

After our initial meeting and emails, I learned GCM was created by Joe Westerman.  In Joe’s words, the name came because “I’ve always liked castles and Portland is green so put the two together and they sound cool and it was the name of the food cart pod at Quinten Tower (their first property). Not much to it but I like it.” The company strategy has been to buy land, set up food cart pods, and then develop the land into apartments through Joe’s other company, Evergreen Builders. The company may manage other properties in the future, but the ties to Joe’s other ventures will always be a presence in the company structure. Joe is an Oregon native who attended Oregon State University, worked for HP, and then went on to start a company reselling homes before developing that into GCM. The name for his building company, Evergreen Builders, which constructs his properties and its original logo, came from a tree in his back yard as well as from Joe’s Oregon roots. 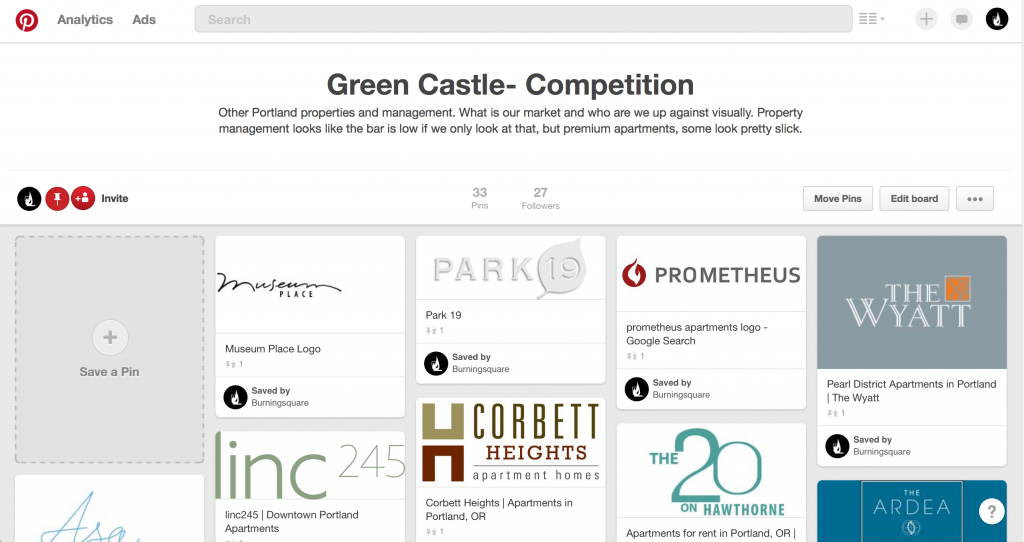 From here I began to look at what GCM’s competition looked like. What are the other property management companies in the area? What does their branding look like? Is there other competition outside of this that we should be considering? I started to collect this information on a Pinterest board so it would be easier to share with Ashlee as we moved forward. You can see the board here: GCM Competition. While reviewing the information, we determined that we should be viewing apartment communities as competition as well. While the primary target audience would be the consumers renting apartments from GCM, we should consider property owners who would want GCM to manage their properties as the audience. More from this check-in meeting to come. 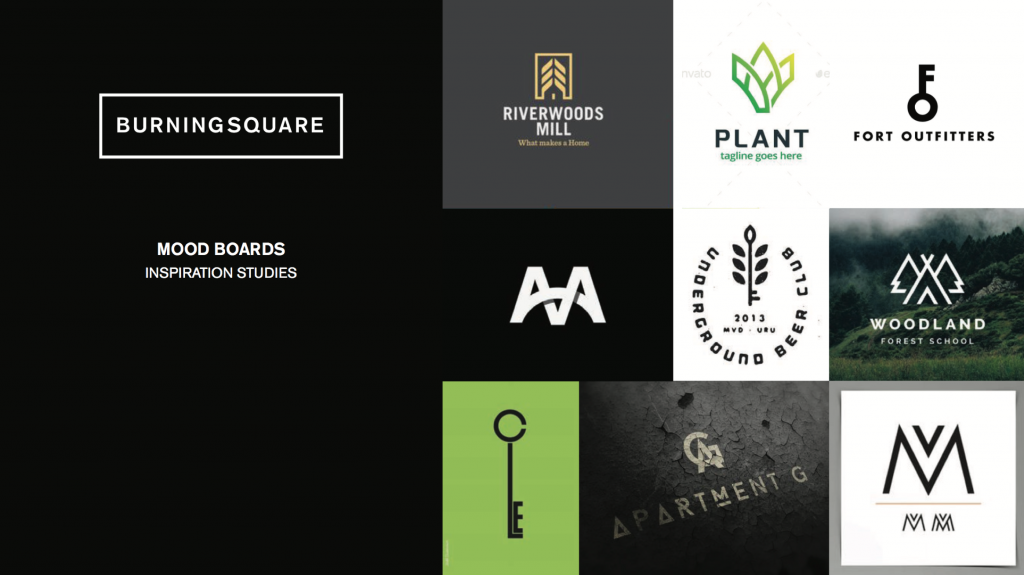 At the same time I was looking into GCM’s competition, I was coming up with concepts for how their new logo and branding could look. I collected this information on individual Pinterest boards based concepts for ease of sharing. The concepts were: Monogram, Wax Stamp, Sigil, Castle, Key, Crown, Property, and Nature. As you can tell, these concepts or themes were pulled from the information I was able to get while determining the brand story. The concepts were all developed to speak to the GCM story and be appropriate to the brand, with a focus on castles, real estate, or nature. While food pods had come up in conversations, our initial meetings had steered me from this direction before even developing concepts around it.

Rather than executing on eight different concepts, I scheduled a meeting with Ashlee to talk through these concepts, GCM’s competition, and the direction to proceed as I moved to designing logos. In this conversation, we also decided that while castle was part of the name and Joe had proclaimed to like castles maybe an overt reference to them was too much. The real root of the company was more in Joe being a local real estate self-starter. We agreed that doing something with GCM as a monogram could be interesting, as could doing something to speak to trees and nature that are very much a part of the city in Portland. There was something interesting in the idea of the key or GCM as a key holder as well so that idea was added to be explored. 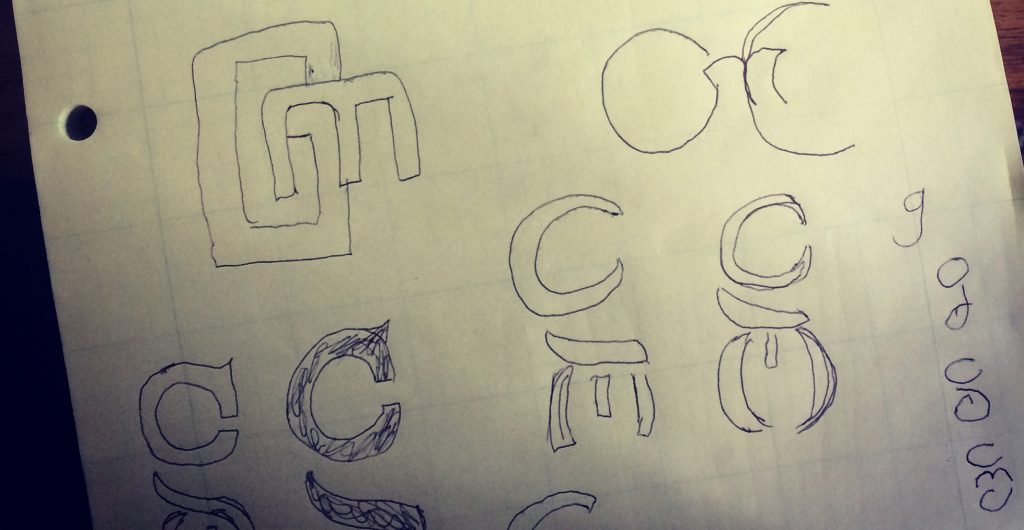 Next came the process of actually drawing logos. During this phase, I typically spend about 25% of my time quickly sketching ideas. The purpose is to get things out quickly and see what sticks. As you can see from the above image, sometimes sketches don’t quite pan out, but often they lead to ideas I can use later or spawn a new idea on how to execute a logo.

I never like to produce branding that I have not considered. In the lens of GCM, this meant mocking up the logo options on business cards, letterhead, signage, and their website for each logo option. It also meant putting the logo up next to some of GCM’s determined competition to be sure the logo seemed to fit in the property management realm but also seemed unique and memorable when looked at next to the competition. 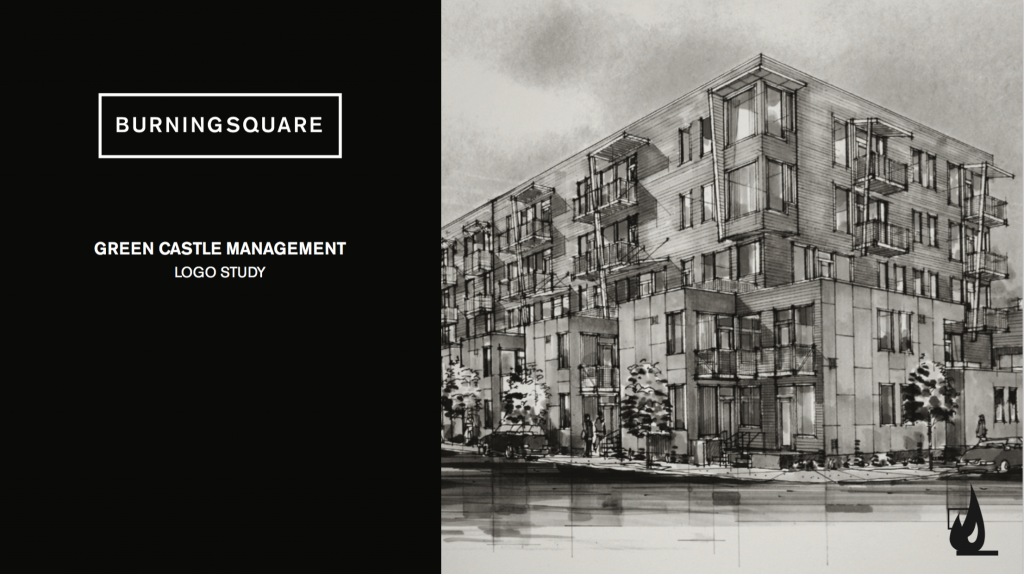 Once all of the explorations where completed, the logo study was placed into a presentation to be shared with the group at GCM so they could decide on a final logo direction. If you’re curious exactly what that looked like feel free to download the presentation here: GCM Logo Presentation

I’m pleased to say GCM liked all the options presented. In fact, Joe liked the tree direction and my executions so much he asked if we could use both logos. One for GCM and the other to re-brand Evergreen Builders. While normally I would recommend against this, as a logo design process should be tied to the company and the logos specific usage, GCM and Evergreen share enough DNA that this usage made sense. In many ways, the companies are just different branches of Joe.

Effective logo design takes time. While the above example wasn’t a particularly long project, it took approximately 25 hours to complete and was billed for more than fifteen hundred dollars. While I pride myself on being fairly quick and giving my clients a great value, I don’t see a way of complete a similar process much quicker, which means effective logo design sadly isn’t a couple hundred-dollar proposition. That being said, if done in a considered way, similarly to how I worked on the project in this example, logo design also gets you a business card design, letterhead design, and/or other similar usages that would show your logo’s effective considered use. Which may be a great value for you. I can say the client was very pleased with this project and what they received from the process.

Now that you have seen the work that goes into an effective logo you can leave with that info or, contact me on my contact page. I’d be happy to schedule an in-person consultation. Please leave any questions or comments below.